This article provides an overview of the operation flow of the SPRESENSE.
Hereinafter, "Spresense" is called "device". Script execution mode is the basic operation of the device.
The device will initialize after booting.
After initialization, connect to the network.
After connecting to the network, access NEQTO Console and authenticate.
When the authentication is completed, download and execute the script. If the device is started without registering to a node on NEQTO Console, authentication will fail.
Note that the script will not be executed in this state.
Check the node registration and restart the device. After the device is booted, it will first attempt to connect to the network, but it is expected that it may take some time for the network to connect due to factors such as the wireless environment. However, there are times when scripts need to run as quickly as possible, and Express mode can be utilized for this purpose. The timeout value can be changed using the .setExpressConf() method. The default value is 30 seconds. If 0 is specified, in effect, there is no waiting for a network connection, and the previously downloaded script can be launched immediately.

Since Version 02.00.00: From the script, the following methods can be used to transition the device to the standby mode.
Standby mode reduces standby power the most because the device is in standby mode, near power off.
When a resume condition occurs, the device will start again from Normal Booting Operation. ("Normal Resume")

Waits for normal disconnection of network communication before shutting down the communication module and transitioning to standby mode.

Forcibly disconnects network communication, shuts down the communication module, and immediately transitions to standby mode. If there are no constraints on the standby mode transition time, using the sleep.setStandby() method is recommended. If the script terminates voluntarily with throw '#nqEXIT', etc., the script restarts with the offline resume maintained. If an exception occurs in the script, the device is automatically reset and restarted in normal resume. 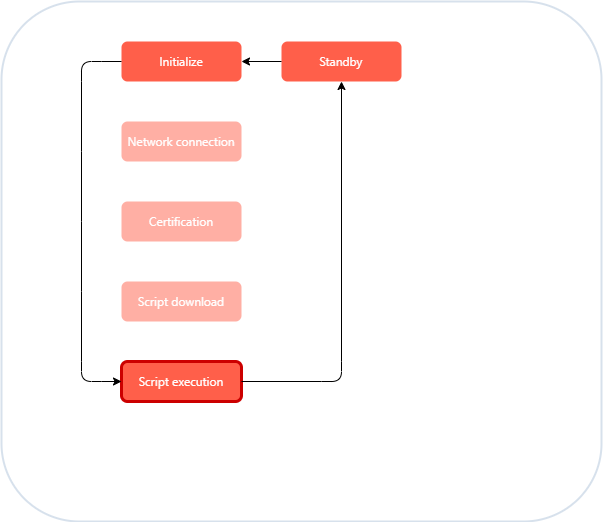 If an exception such as a throw or a syntax error occurs while executing the script, wait for the script to be modified. This state is called safe mode.
Check and correct the script, and perform "Reload Script" using the trigger command from NEQTO Console.
When the device receives the "Reload Script" instruction from NEQTO Console, it will download and execute the updated script.
In addition, the device automatically checks if the script has been updated during safe mode. The check interval increases in the order of 1 minute, 2 minutes, 4 minutes, 8 minutes, 16 minutes, and 30 minutes. And finally it will be every 30 minutes. Caution: Please do not turn off the power while updating the firmware. The device gets the time information from NEQTO Console and automatically synchronizes the time.
The timing of time synchronization is as follows.